An unknown, fascinating world may be just past the forest, to the left from the main road – or over several thousand miles away, on the other side of the ocean.

What matters is the desire to explore something new, meet different people and get to know foreign cultures. To do that, you need to have the spirit of an explorer.

Rafał Żurawik, a project engineer at 7R Investment Department, is a travel aficionado with a desire to explore exotic locations. Together with his girlfriend and a small group of friends, he recently visited the Philippines, Thailand, and Bali. This January, he traveled to Guatemala, a country one-third the size of Poland and located in Central America.

About a half of today’s Guatemalans are descendants of Spaniards, who conquered this region in the 16th century, and the Maya, the indigenous residents of Central America and creators of an amazing civilization (building impressive pyramids, stone buildings, and creating a precise calendar) that rose in the first half of the first millennium AD and fell long before Mieszko I of Poland even though of christening the Poles. Not long ago, the Maya civilization got notable press coverage: six years ago, every couple of days, tabloids expected the end of the world, an event the Maya predicted to happen in 2012. Well, either the Maya were wrong, or the interpreters mixed up their calculations…

When asked about the reasons behind selecting Guatemala as his travel destination, Rafał admits to basing his choices on the desire to explore new places and interesting cultures as well as… bargains. He claims not to spend a lot of money on travel. His secret is that he hunts for cheap flights which from time to time appear online, even to the most remote destinations. Central America has been on his list for a long time, however, Guatemala came into the picture only because he found low-priced round-trip tickets through Houston (US) to Nueva Guatemala de la Asunción (Guatemala City), the official name of the Guatemalan capital. He didn’t stay there long as the group headed straight from the airport to Antigua Guatemala (Ancient Guatemala), a historical state capital located 20 miles west from Guatemala City, destroyed by an earthquake in the 18th century. From there, they traveled on to their main point of interest and took a hike to the Acatenango volcano (3,976 m (13,045 ft) a.s.l).

On the first day of their two-day-long journey, they took an exhausting hike uphill. The group struggled not only with the tropical heat, extreme height, and falling oxygen levels but also the loose ground, composed mainly of volcanic ash. They decided to set up camp several hundred meters below the volcano’s peak. Low temperatures of approx. 5 degrees Celsius made is almost impossible to sleep so they resumed their hike at two in the morning. Acatenango itself wasn’t the main attraction; instead, the group wanted to see Fuego (3,763 m (12,346 ft) a.s.l), an active volcano located a couple of miles south. Three years before, its eruption had forced the authorities to order an evacuation of residents and to close the airport in Guatemala City.

Fuego (Spanish for “fire”) did not disappoint. The volcano made rumbling sounds, spewed out smoke during the day and lit the night sky with the lava oozing from its crater. A truly unforgettable sight!
The group spent the remaining part of their trip enjoying more traditional forms of sightseeing. They visited Antigua, which, despite being destroyed in the 18th century, still amazes visitors with numerous churches and Spanish baroque buildings. Later, they spent three days on the Caribbean Sea (Guatemala is located between two oceans) and traveled to tropical forests in the lowlands. Rafał regrets not having enough time to see the northern part of the country with the remains of Maya structures. Unfortunately, his time off work was not that flexible. The trip was over; it is a shame that holidays always end too soon.

And what about the title of this story? Well, Rafał took 7R’s banner with the company’s logo with him on holiday and spread it on the top of the volcano, almost 13,000 feet above Guatemalan soil. Maybe one day Guatemalans will need large warehouse spaces? 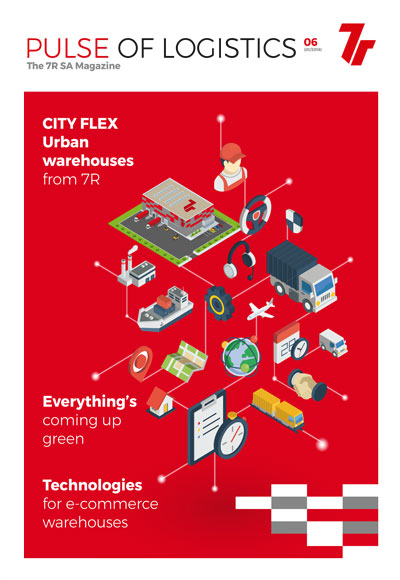